a fancy jar for salve and show-offs

The term albarello is used for a cylindrical jar with a constricted base and a short, wide neck. In the 15th century, Spanish and Italian potters became famous for their tin-glazed products, including the albarello. However, both the glazing technique and the shape of the albarello were imports from the Middle-East.(fig. 1) In this article I’ll tell a bit about the Spanish and Italian albarelli of the late middle ages and the Renaissance.

In the video below you can watch a reconstruction of a 15th century albarello being made. Remember to put your sound on.

How were albarelli made in the Renaissance?

My reconstruction method differs slightly from the traditional production process of the albarello. We know quite a bit about the manufacture of early Italian maiolica because of Cipriano Piccolpasso (1524 – 21 November 1579). He has been so kind to leave a manual behind called Li tre libri dell’arte del vasajo – The three books of the potter’s art. It gives us the opportunity to compare the potter’s wheel in the video to Piccolpasso’s illustration.(fig. 2) There are three main differences. Firstly, the 16th century wheel was mostly made of wood. Secondly, it had plain bearings instead of ball bearings. The third difference is that, according to Piccolpasso, the wheel head, on which the clay was shaped, used to be especially designed for specific wares. If the potter needed to throw another shape he would switch the wheel head.[1] I don’t know how widely spread this feature was but I’ve never seen it on modern wheels. Regardless of these differences, my wheel probably rotates much like a Renaissance wheel.

The recipe for the white glaze was often based on lead and tin. Lead is a very stable ingredient that provides a low melting point. Sadly, it’s also toxic and harmful to the environment. That’s why I chose to work with a lookalike that does contain tin but no lead.

In the video, I work with a preparatory sketch before picking up the brush. Some albarelli were originally painted without a sketch.[2] The more complicated designs might have been prepared with charcoal. Surprisingly, Piccolpasso doesn’t write a word about it but a number of almost identical tin-glazed products has been preserved, suggesting that the designs were laid out in a different material before they were painted.[3] In a well-known copying technique, the lines of the design are traced on a piece of paper with pinholes. The potter puts the paper over the glazed surface of the pottery and dusts finely ground charcoal over it. The dust travels through the holes and settles on the glaze, leaving a pattern as a guide for the painter.[4]

The color palette in my reconstruction is limited to cobalt blue only. The earliest European tin-glazed earthenware used to be executed in manganese brown, copper green, sometimes yellow and a light blue. The darker cobalt blue was introduced later along with yellow and orange made with antimony and ferric oxide.[5] Especially luxurious were designs executed in lustre glazes. These would result in copper, silver and golden decorations. These lustre glazes contained among other things copper, silver and sometimes mercury. They had to be fired in a reducing atmosphere, requiring a third firing stage on top of the already complicated trajectory.[6] Arabic and Spanish potters developed this technique to an unequalled level.(fig.3)

Early European albarelli were fired in wood kilns. Piccolpasso gives us a wonderful drawing of a maiolica kiln.(fig. 4) He mentions that the kiln should reach the proper temperature after eleven hours of firing. Then the potter needs to check the glow of the fire through various spyholes in the kiln wall to make sure that the heat is equally distributed. If not, he will have to play around with the draft to spread the heat properly throughout the kiln.[7]

It was quite a challenge to protect the pottery from flames and other harmful influences. This is why tin-glazed products were put inside so-called saggars. These earthenware cylindrical containers were filled with one or more glazed products and stacked one on top of the other inside the kiln.

It’s good to remember that potteries had small or large groups of employees, allowing different degrees of specialization.[8] Certain ceramists might have spent most of their careers throwing, some others glazing or painting and yet others firing kilns. The idea that one person alone would carry out the whole production process is out of line with the way things usually worked in these kind of potteries.

What was the albarello used for?

Albarelli are often referred to as apothecary jars but various medieval and Renaissance sources point to a more versatile use.

However, medicine storage must have been a major purpose. In a Bolognese edition of The Canon of Medicine by Avicenna from ca. 1440, we find an illustration of a drug store with shelves lined with albarelli.(fig. 5) Italian hospitals also used tin-glazed storage jars, sometimes great amounts. The Hospital of Santa Maria Nuova in Florence, one of the largest in Europe, ordered 200 small glazed albarelli, two large albarelli and three small white albarelli for their apothecary in 1433 or 1434.[9]  Some albarelli were made with the emblem of the commissioning hospital. This one for example bears the crest of the Hospital of Santa Maria della Scala in Siena.(fig. 6)

In medieval iconography, we often find biblical women holding albarelli, for example the Myrrhbearers that came to Jesus’ tomb. The albarelli indicate the myrrh that they brought to anoint Jesus’ body. In this detail of a painting by Van Eyck we can see Mary Salome holding what seems to be an albarello of Syrian make.[10](fig. 7)

Another clear indication that albarelli were used as pharmacy jars can be found in labels. In the 15th century, albarelli were by exception provided with a painted label. However, this practice became quite common in the 16th century. This jar is inscribed Laudano – laudanum is a painkiller containing opium.(fig. 8)

Other labels suggest a different purpose. This one for example reads CISSCA:BE and on the reverse side LAFRAN (= Bella Francesca- beautiful Francesca).(fig. 9) It seems that such amorous messages turned the jars into the perfect love-gift, especially if they were filled with sweetmeats.[11] Other domestic ingredients were also stored in albarelli. 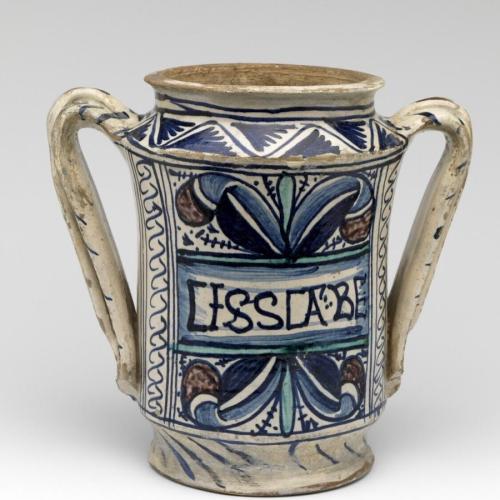 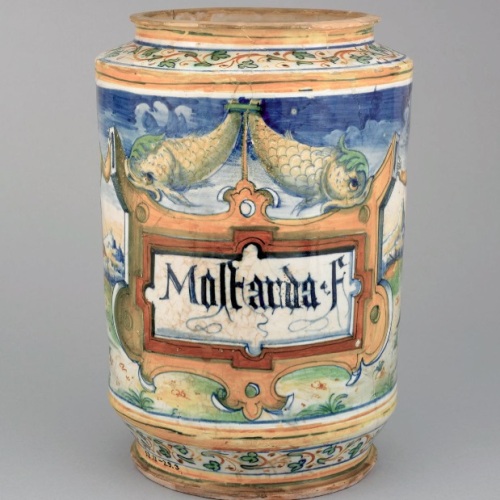 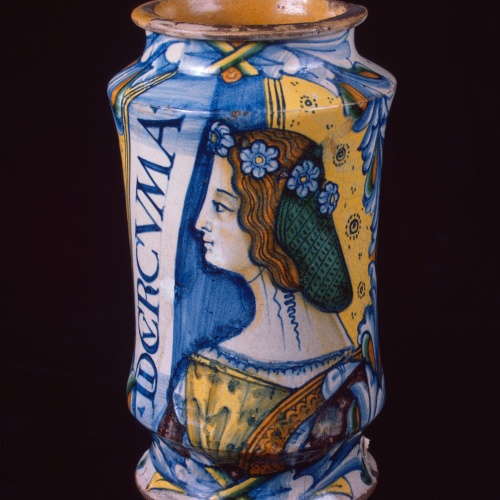 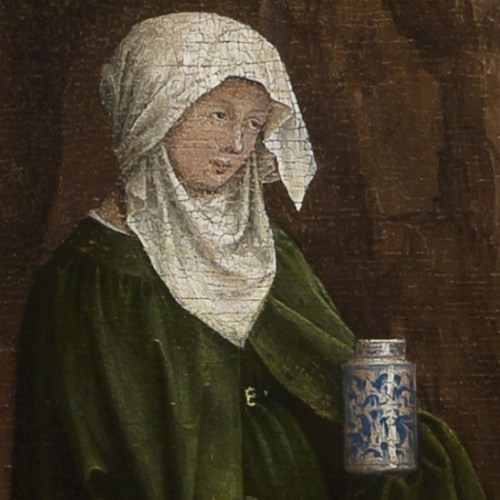 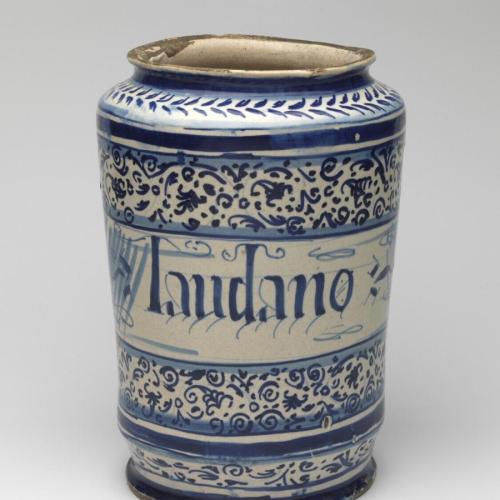 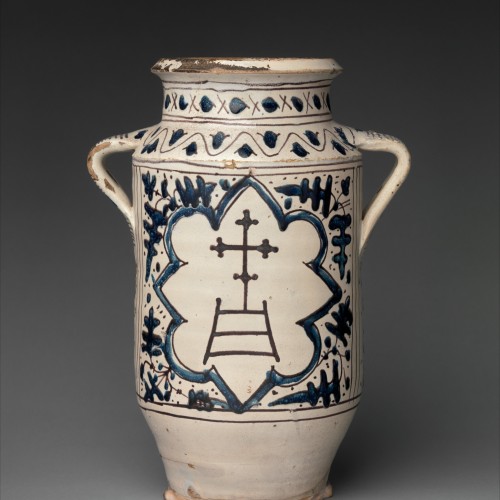 This albarello contained mustard of a fine quality: Mostarda f(ina)(fig. 10) and the jar with the wonderful lady’s portrait must have held a large amount of curcuma (probably turmeric), which was used as a spice, a drug and a yellow dye.[12](fig. 11) This jar could therefore be an example of an albarello used for cosmetics: turmeric was sometimes used by women to dye their hair.[13]

Yet another inscription takes us back to the pharmacy. Pharmacies of the 15th and 16th centuries did not merely provide medicine but other products such as artists’ pigments too. A 16th century albarello mentioned by Henry Wallis is inscribed PILLE DE LAPIS LAZALI, clearly indicating lapis lazuli, the famous blue artists’ pigment.[14]

Another use for the albarello can be observed in many late medieval and Renaissance paintings. One of the most famous examples must be the Portinary Altarpiece painted by Hugo van der Goes in 1475. Right in the foreground of an elaborate scene with the adoration of the shepherds, a still life can be seen with a corn sheaf, flowers, a glass and an iconic example of a Valencian lusterware albarello.(fig. 12) A related but more surprising use for the jar can be found in Carlo Crivelli’s Annunciation with Saint-Emidius from 1486.(fig. 13)

In this painting an exceptionally luxurious planter is depicted – there can be no doubt that it’s in fact an albarello. A second albarello is sitting on a shelf among a carefully arranged mess of domestic items. It’s covered with a piece of cloth or parchment, a common method for which the albarello’s neck lends itself particularly well. This green jar shows that some albarelli were quite unpretentious. Others were made with expensive materials and elaborate decorations. The more luxurious pottery was sometimes part of diplomatic gifts. Lorenzo de Medici, one of the most powerful Florentine statesmen and influential art patrons of the 15th century, received a gift of maiolica vases from the lord of Rimini. He admitted that he valued these ceramics: ‘more than if they were of silver, for their excellence and rarity … and novelty to us here’.[15] The high regard in which precious ceramics stood at the time is emphasized by numerous albarelli with armorials, mottos and even portraits of highborn men and women. This albarello for example bears the arms of the Luna family, lords of Paterna.(fig. 14) Apparently these ceramics strengthened the identity and status of cities, families and individuals. But the heraldic earthenware wasn’t necessarily owned by the ruling families themselves. Others bought them too, showcasing their support.[16]

Last but not least, the status of tin-glazed pottery can be deduced from the confidence of some Renaissance potters. The Masci family of potters wrote in 1498 that their products were: ‘beautiful and unheard of and sold throughout the whole world, and because of this the city of Perugia takes pride and increases its fame and everyone wonders to see these maiolica works.’[17]

The Masci potters may have been show-offs, but they were also right. In fact, being beautiful may be the one purpose that those old albarelli never lost. Whether the jars are displayed in museums, depicted in books or spread over the internet – there is still a great charm in their shapes, their colors, their pictures and their patterns. The revival of medieval and Renaissance albarelli through reconstructions is witness to their popularity.(fig. 15)

The Concise Encyclopedia of Continental Pottery and Porcelain states that the word albarello is of obscure origin[18] and it is true that many hypotheses about the etymology are less than convincing. Is albarello derived from Latin alveolus (a cavity, womb, trough, basin) and ellus (a diminutive)? Or is it related to vulgar Latin albarus, Latin albus (white)? Another creative solution for the riddle is the assumption that Eastern jars were originally made from bamboo sections, supposedly inspiring potters to make similarly shaped jars. According to this hypothesis the Italian term Alberello (young tree) was first applied to the bamboo- and later to the ceramic containers.[19]

A relation with the Arabic Al-barani and al barril [20] seems the most plausible. The term Al-barniyya, plural Al-barani can be attested as early as the 10th century and it has been used for both domestic containers of various shapes and cylindrical vessels with a concave profile intended for the storage of medicine.[21] Ilaria Zamuner points out that the diminutive suffix ello can be found in other Italian words such as the hypernym Vasello or in utello, also derived from Arabic – a terracotta pot for oil storage that could be found in the apothecary as well.[22] This hypothesis coincides perfectly with the origin of the albarello, which lies after all in the Middle East.